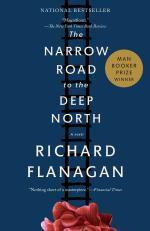 Much of the story is told through the eyes of Dorrigo Evans, an Australian medical officer who, through attrition, inherits seniority over his group of several hundred prisoners. Day after interminable day he is focused on a single task: trying to keep his men alive. This isn't easy. The men are literally on starvation rations, live in filthy conditions and have minimal access to medical supplies. They are worked continuously, and receive regular beatings for the slightest infraction (real or imagined).

Their captors regard the prisoners with total contempt (since they either surrendered or allowed themselves to be taken alive), and, given the appalling treatment of their slaves, it's often unclear whether they even care about completing the rail project at all. Their sole focus is carrying out, without question, the orders that arrive from the Emperor; at one point Dorrigo is inexplicably forced to pick one hundred of the healthiest prisoners, who must then embark on a 100-mile march deeper into the jungle – almost certainly a death sentence for most of them.

There are many unforgettable scenes: the horrific amputation of a prisoner's gangrenous leg; a senseless multi-hour beating of a prisoner for shirking (he'd actually been ordered back to camp as unfit to work, as he was no longer able to stand); the smell of the rudimentary hospital tents, containing rows of men whose bodies are in various stages of decay.

What doesn't quite work are the scenes describing Dorrigo and Amy, his uncle's young wife, with whom Dorrigo had an affair shortly before the war. While the extended jungle scenes are intensely gripping, effortlessly carrying the reader along, the events back home in Australia are disjointed and unconvincing, almost clumsy in places. Several of these sections seem out of place, as though they've been dropped in from elsewhere. I suppose that this love story is there to contrast with the horrors of the jungle, but I don't think it really adds very much.

But, setting aside these sections of the novel, we're still left with a gripping account of one of humanity's darkest periods. Resilience, bravery, selflessness, cruelty, hope and despair are all here in abundance. Although it's obviously not a fun read, Flanagan does us an important service with his unflinching portrayal of a major manifestation of the profoundly sick society that was imperial Japan. These events should never be forgotten, although soon enough they will be remembered only vicariously, through accounts such as this.