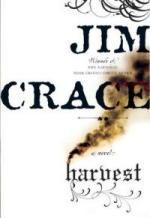 Most of the families have lived on and worked the land for generations, and are satisfied with their hard but predictable lives, regulated as they are by the seasons and nature's bounty. They don't like newcomers, or any kind of change. The narrator, however, is a settler: he originally arrived in the village a decade earlier, with his master, the current lord of the manor. He is Walter Thirsk, and he only gradually gained acceptance from the other villagers after his marriage to a local girl. His wife, however, died several years ago, which has left his position within the village less certain. At the start of the novel he considers himself to be an insider, but feels progressively less secure as lives begin to unravel and the villagers close ranks. This makes him an ideal observer of the upheaval that transpires, since, it turns out, he's not bound by family or group loyalties to the same extent as the others.

The events of the story occur over several days in autumn, during harvest. Walter describes a series of apparently unconnected developments. First, three unruly villagers torch the master's dove barn (after a night of revelry during the harvest celebration) in a botched attempt to smoke out the doves and thus prevent them from eating the grain prior to gleaning. Immediately following this, three strangers (a man with his daughter and her husband) arrive within the village boundary, and attempt to claim the traditional right to work the common land. These strangers, we later learn, are fleeing their own village's enclosure. The outsiders' ambitions are quickly quashed, however: following a brief stand-off with the villagers, the two men are placed in the pillory for seven days, and their female companion is sent packing. They are accused of burning down the barn, most vehemently by the guilty parties themselves.

Things rapidly unravel from there. A mapmaker has already arrived in the village; his work has raised suspicions. Why does the master want a detailed map of his land? Why now? The master was tied to the land by marriage, but his wife died the previous year. The dead wife's brother (the actual landowner) arrives the day after the harvest, with several brutal henchmen and some big plans, involving fences and sheep. He corrals and provokes the villagers, who give him the justification he needs to kick them off the land.

Throughout, Walter constantly vacillates: he initially wants to help the scapegoated strangers but somehow never gets around to it. He later wants to help the villagers but does not (in fact cannot: when the time comes they no longer trust him). He always seems to be absent whenever a major event occurs, and can only infer the true nature of what is unfolding around him. At any given point in the story, he seems to know what he should be doing, but is so hesitant that events pass him by. Can this paralysis be attributed to a failure to recognize the magnitude of the changes, or the inability to respond in an effective way?

Eventually, now alone in the village (even the mapmaker has disappeared one night under dubious circumstances), he releases the surviving prisoner from the pillory, hoping to gain a friend or ally. Instead, the strangers loot the village's vacated cottages, burning them as they go, before leaving with a cart loaded with loot – pulled by the village's two remaining oxen.

Walter, in his uncertainty, has repeatedly managed to avoid committing himself to any definite course of action. A direct consequence of this is that, while he has been lamenting the major catastrophe which was in any case inevitable, he has neglected to act to influence the more personal events in which he could have made a difference. So what possibilities are now left open to him, and what will he do?

This is a simple story told in a simple but effective way. The themes explored and the language describing them earned the novel a place on the Booker prize shortlist. Belonging, identity, displacement, change, reparation, the collective versus the individual, insiders versus outsiders and how these categories can shift: these are all explored in precise and beautiful prose. Although the writing has a simplicity commensurate with the era Crace describes, it is not difficult to see that the novel has plenty of bearing on our own times. This is a deeply allegorical, moral book; a parable that will stay with the reader for a long time.