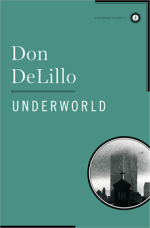 First up was Underworld, a great slab of a novel. Perhaps befitting its aim of encapsulating an entire period of American history, my edition came with newspaper-quality print, complete with occasional squashed or reverse-italicised lines of text.

The cinematic prologue was strong, and that's what drew me in; as I always do with any novel, I sampled the first couple of dozen pages to see if it grabbed me. This one did, so I bought the book. But, sadly, soon afterwards it let go and wandered off, frowning and mumbling interminably to itself.

The story didn't build on the famous opening. There were a few sections that briefly raised my hopes, but any momentum built invariably dissipated. The writing isn't difficult in any way; the only challenge was to my powers of concentration. On several occasions I sat down, made myself comfortable, started reading, then within a few minutes my thoughts would start wandering, or perhaps I'd find myself looking at cloud formations through the window. Stories can be fantastic vehicles for getting across ideas, but if they can't even keep my attention how could they ever get that far?

It's just so very very verbose: strewn with overly-ambitious (and frequently bizarre) similies and meandering, more-or-less plotless prose. A bunch of mostly uninteresting characters going about their mostly mundane lives. I don't think there are any actual themes here; it's more like a literary Rorschach test. This became clear to me as I read through some of the reviews on Goodreads: everyone's got their own widely divergent interpretations of the book's meaning.

Another thing that struck me was that many of the conversations between pairs of quite disparate characters are almost uncannily similar, in both style and language. Often this takes the form of a stereotyped rapid-fire back-and-forth, in which the participants repeatedly talk past one another, returning to earlier parts of the conversation as if they're out of sync and/or in some kind of weird double act.

I broke my own golden rule: if a novel loses me, it gets an hour — tops — to get me back, otherwise we part company. This one got an extra 300 pages, as I fruitlessly waited for some kind of point to be made.

Fiction should arouse empathy: it can deal with ideas on a much deeper emotional level than is possible with most forms of non-fiction (see my discussion of The Overstory last month). A story has to make you care about at least something or someone described within it; if it doesn't do this it's fundamentally failed. That's what happened here.

So this was the first proper negative of my newly-resumed reading career, and it also left me slightly apprehensive about a couple of the other hefty novels I've got waiting on my shelf.

It was time to move on, and I needed a change of pace. 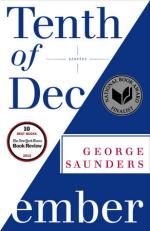 So it was with great relief, and not a coincidence, that I next chose a short story collection: Tenth of December, by George Saunders. And what a contrast! Here we have sharp, pointed prose that sets off at full speed and doesn't let up.

Saunders is obsessed with the connected themes of mortality, fate (in the sense of the limits imposed on individuals' lives) and luck, good and bad. Of the stories included in this collection, those that develop these ideas most strongly are 'Puppy' and 'Home', along with the title story. But all make you think.

He also has a keen eye for the absurd, as manifested both in individual humans and in human society (or potential, semi-plausible, alternative societies). This comes across most strongly in the middle four stories, culminating with the weirdest, 'The Semplica Girl Diaries'. At 60 pages, this is the longest story in the book, and it's not one you'll soon forget. The cruel, banal logic casually used to justify an utterly abhorrent practice almost made my skin crawl.

These stories, and the crisp language used to tell them, were very refreshing, especially following Delillo's turgid prose. 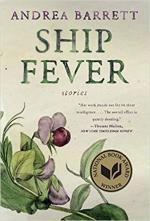 Two strong short story collections, in fact; I enjoyed the first so much I immediately moved on to another one, equally excellent.

Ship Fever is a much more traditionally-written series of tales. The two collections are pretty evenly matched overall, although if pressed I'd say Barrett is the more consistent. But it's hard to compare them as they're very different authors: where Saunders is experimental, Barrett's language is tried and tested, right down to the technical aspects of the writing. Not one to eschew quotation marks, she's obviously also a big fan of the increasingly (and unjustly) marginalized semicolon; there are scores of them here, whereas I'd be willing to wager that Saunders has had his surgically removed from his keyboard.

The best of Barrett's short stories ('Rare Bird', 'Birds with No Feet', and 'The Marburg Sisters') each deal with individuals finding their place in life. They're all intelligent, well-paced and thought-provoking, as well as a lot of fun.

The other standout is the eponymous novella, which brilliantly evokes the story of Irish emigrants escaping the famine of the mid-19th century only to find themselves trapped in a typhus epidemic brought on by the filthy conditions of their voyage to Canada. A great way to finish the collection.

I'll definitely be reading more of both these authors: Saunders has a recent award-winning novel plus three earlier collections of short stories, amongst which Pastoralia most caught my interest. Barrett followed up this collection with a novel and another book of short stories, The Voyage of the Narwhal and Servants of the Map, respectively. These are all on my list. 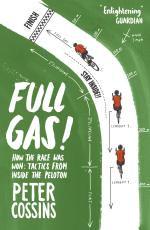 The other book this month was Full Gas!. There's not much to say about this one: if you happen to be a fan of professional cycling but want to know more about many of the subtleties involved in it, this is a good choice. So, quite esoteric, but there you go.